I have been reading a great book called Hallucinations by professor of Neurology Oliver Sacks. It has been very enlightening for me, as I went through a phase as a child of ‘seeing things’ in the tenement flat  I lived in, during the first part of my childhood in Glasgow.

Once I saw a man and a lady projected on my bedroom wall, dressed like old fashioned farmers. They were smiling and waving at me as they drifted along until they reached the door then they disappeared.

Another time I saw a woman with her back to me at my desk in a long flowing gown. My logical mind thought it must be my mother although I knew it wasn’t really, but I said ‘Mum?’ The figure turned round to look at me then disappeared.

Once I was playing hide and seek with my sister, and saw a much younger version of my sister, clear as day crouching down and hiding under the bed. I ran out of the room to say “Celia in den 1, 2, 3” but the real Celia had got there before me!

When I was at my Granny and Grandpa’s house once, I saw (and heard!) a tiny string quartet only a few inches high, hovering in the middle of the room.

As a young child I didn’t really question these sightings, but as an adult  I have always thought that they must have been ghosts. Since the last few weeks of reading this book, and being a bit older with a more rational mind, I have realised that they were hallucinations. I have no idea why I had hallucinations as a young child, as all the explanations in the book have so far been linked to sensory deprivation, intoxication, illness or injury which did not apply to me.  I have not finished reading yet so perhaps there will be further enlightenment!

There is a song about these hallucinations on my new album Undercurrents which is being released later this year, called “Complicated Human Mind” (or perhaps the title will be condensed to “Complicated Human” I am not sure yet!

The book also mentions hallucinations with closed eyes which I can really relate to. I went through a phase in my early 30’s of being bombarded with images of unkown faces when I closed my eyes. I think that was stress related, but some of the faces were interesting, and one came with a name ‘Sparrowhawk’, which I made into a painting. And another,  called ‘Shadow’, on the right. 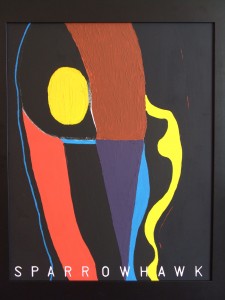 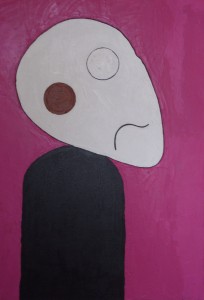 It’s a strange and wonderful life. Thanks for reading and I hope you have a great weekend.